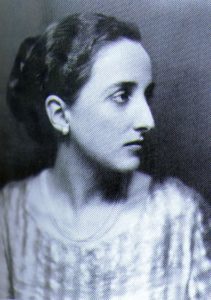 Katharine Sergeant Angell White joined the editorial staff of The New Yorker in 1925, six months after it was founded by Harold Ross, and she remained the only female editor for three decades. Within months, she and Ross established a professional relationship of complete equality, and, in addition to her responsibilities as fiction editor, White collaborated with Ross on every part of the magazine, becoming known as “the intellectual soul” of The New Yorker.  In her role as editor, White was nurturing, and her influence helped shape the careers of emerging writers including Ogden Nash, Mary McCarthy, John Cheever, William Maxwell, Jean Stafford, John Updike, James Thurber, and her beloved husband, E.B. White. Reflecting on a first meeting with his wife at The New Yorker, White said: “I noted that she had a lot of black hair and the knack of making a young contributor feel at ease. I sat there peacefully gazing at the classic features of my future wife without – as usual – knowing what I was doing.”

A formidable woman, White graduated in 1914 fourth in her class from Bryn Mawr, where the feminist culture, propagated by M. Carey Thomas, president of the college, encouraged women to be “both economically and psychologically independent from her husband.”  White’s marriage to Ernest Angell, a graduate of Harvard Law school, ended in 1929, the year she married E.B. White. Their bond was strong; devoted to each other forty-eight years.  In 1938, when White needed a peaceful environment to write, they left New York and moved to their saltwater farm in Maine. Katharine, while sad to leave her life and work in Manhattan, gladly made the necessary adjustment for her husband: editing manuscripts, galleys and books sent by her secretary at The New Yorker. She also now had time to discover a passion for gardening and writing; between 1958 and 1970 Katharine penned fourteen gardening columns for The New Yorker and in 1979, two years after her death, E.B. White published the collection in a book, Onward and Upward in the Garden. In an interview with the New York Times to discuss the book, White talked about his wife, and the life they shared: “Every day, a few minutes before lunch, Katharine White would “go out among her borders,” as her husband told it. “She never dressed down for her gardens.” She might be wearing a tweed suit and Ferragamo pumps, and if it were muddy, she kicked off the shoes on coming back into the house. As for her attitude toward flowers, he said, “She didn’t mind a ruffled petunia, but never a ruffled snapdragon. She was not a ruffled girl herself.”