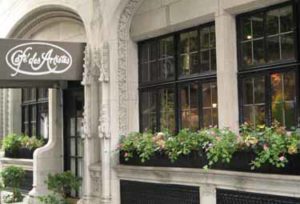 Café des Artistes was located in the lobby of Hotel des Artistes at 1 West Sixty-seventh Street, a part Gothic, part Tudor revival co-op building that originally opened as artists’ studios. The restaurant, opening in 1917, had been a favorite of many artists of all genres, from Marcel Duchamp to Isadora Duncan. In 1975, George Lang, a successful and highly respected restaurateur, re-created the café in the tradition of a warm, middle-European coffeehouse.#DanaMcGarrySeries #womensfiction #LynnStewardny #NY #booksforwomen