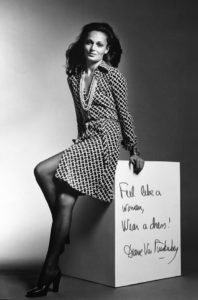 “The minute I knew I was going to be Egon’s wife, I decided to have a career. I wanted to be someone on my own, and not just a plain little girl who got married beyond her desserts,” said Princess Diane von Furstenberg. In 1970 with a $30,000 investment she launched her women’s design business and soon moved from Paris to New York and into the arms of New York society. Diana Vreeland declared the figure-flattering, knitted jersey wrap “Diane” dress “absolutely smashing.” Apparently women across the globe agreed. In 1973, the wrap dress was entered into the collection at the Metropolitan Museum and within five years, five million dresses were sold. In 1976, Ms. von Furstenberg bumped Gerald Ford from the November cover of Newsweek and was touted “the most marketable woman since Coco Chanel.” She re-launched her company in 1997 and re-introduced the wrap dress to a new generation of women. In 2009, Michelle Obama wore the signature chain link print wrap dress on The Official White House Christmas Card. A cultural phenomenon, the dress hangs in the Smithsonian Institute. Still looking for new challenges, Ms. von Furstenberg, 66, designed her first children’s collection for GapKids in 2012.