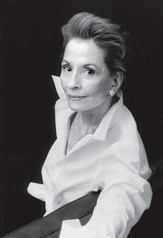 When Ira Neimark took the reins as president of B Altman, his main charge was to “bring this grand old, conservative store into the mainstream of retailing” and in order to do that, he needed a team of experienced fashion merchants and a person to direct them. In 1971, in the newly created and powerful position of Fashion Director, Dawn Mello played a major role in turning B Altman around. Her influence reached from the look of the windows to floor displays, advertising, and buying and her good eye and instinct for talent identified new designers and trends. In 1975, Ms. Mello followed Ira Neimark across Fifth Avenue to Bergdorf Goodman where in her 14 year career she served as president from 1983 to 1989. Following Bergdorf Goodman, Ms. Mello joined the newly formed Gucci Group as Executive Vice President and Creative Director Worldwide. In 1994, she rejoined Bergdorf Goodman as President but this time in addition to fashion merchandising departments, all creative aspects of marketing were reporting to her. When Ms. Mello left Bergdorf Goodman in 1999, she started her own consulting company, Dawn Mello and Associates, and in 2007 she was a founding partner of The Atelier Fund, a fund that invests in early–stage fashion businesses. Throughout her career, Ms. Mellow has received numerous industry awards.