Join Dana McGarry at the Met’s afterparty at Café des Artistes where she meets Diana Vreeland. Below is an excerpt from A Very Good Life

Café des Artistes, opening in 1917, had been a favorite of many artists of all genres, from Marcel Duchamp to Isadora Duncan. In 1975, George Lang, a successful and highly respected restaurateur, re-created the café in the tradition of a  warm, middle-European coffeehouse. The thoughtful renovation was not drastic, and the restaurant still invoked an enchanting, old-world elegance. An obvious improvement was the restored and properly lit murals, painted in 1932 by Howard Chandler Christy: thirty six flirtatious nudes inspired by the all-American Gibson Girl of the 1900s. The café remained a popular New York gathering spot for Upper West Side residents and a new crowd of celebrities, including Paul Newman, Rudolph Nureyev, Itzhak Perlman and Leonard Bernstein until the closing in August, 2009.

Read an excerpt. Available on AMAZON

Dana entered the restaurant and was getting a glass of wine when Max Helm approached her with his wife, recognizing her from the day they’d met at Lenôtre.

“His father had a heart attack today,” Dana answered. “I’m afraid he won’t be joining us.”

“That’s terrible news,” Max said. “I’ll have to give him a call tomorrow. I hope everything turns out okay.”

As Max and his wife walked Dana around the small bistro, discussing the history of the enchanting Howard Chandler Christy murals—thirty six flirtatious nudes inspired by the all-American Gibson Girl of the 1900s—he introduced her to many of the guests. Dana made a mental note to tell Andrew the following day about the fascinating people she was meeting.

Dimly lit and cozy, Dana thought that Café des Artistes was the perfect place to be on this wintery December evening. After her various epiphanies during the lecture, she found that she was not star-struck to be around such illustrious company, but rather grateful that she was learning more and more about how to live life on her own terms. She was thrilled, of course, to be in the company of Rosamond Bernier—that hadn’t changed—but her definition of greatness had been modified. She realized that her personal satisfaction for creative ideas and a job well done was more important than approval from colleagues and senior executives. She loved the city, with its vibrant pace and cultural richness, but she would also enjoy watching a star-filled sky from a country home. Greatness didn’t have to result from tragic circumstances or an obsession with one’s career.

Noting that Bernier was talking to only two people, Dana approached while carrying a small arrangement of tuberoses and a thank you card to express her appreciation at being invited to the after-party. Before she could get close enough, however, a woman dashed over to Rosamond with raised, outstretched arms, breathlessly declaring, “The lecture was divine! Dee-vine!”

The woman was Diana Vreeland, the high priestess of fashion and legendary fashion editor of Harper’s Bazaar and editor-in-chief of Vogue.

Dana paused, eyes wide. Well, perhaps she was a bit star-struck after all. During her forty-year career, Vreeland had revolutionized fashion and publishing with her innovation, vision, and style. She discovered Lauren Bacall and became fashion advisor and mentor to Jacqueline Kennedy. Her list of famous friends, from Cole Porter to Warren Beatty, was endless. In 1971, at the age of seventy, her talents were center stage in the newly-created position of special consultant to the Costume Institute at the Metropolitan Museum of Art, revitalizing the institute with lavish, three-dimensional exhibits that drew blockbuster crowds.

From behind, Max’s hand gripped Dana’s elbow and guided her closer to Rosamond Bernier. “Get in there and say hi,” Max whispered. “Don’t be shy.”

“Dana, how wonderful that you could make it!” Bernier said. “I hope you enjoyed the lecture.”

Dana was flattered that Bernier remembered her name, and she offered her the flowers. “I enjoyed it more than you’ll ever know. Thank you very much for inviting me.”

“You’re welcome,” Bernier said, turning to Diana Vreeland. “Diana, I think you should consider having Dana join your volunteers at the Costume Institute to work on next year’s American Women of Style exhibit. I think she would be perfect.”

“I agree,” Max volunteered. “Andrew Ricci thinks she can walk on water.”

“And what do you do?” asked Vreeland, examining Dana with piercing x-ray eyes.

Diana Vreeland’s expression lit up immediately. “What a coincidence! I just heard that Tony is having his show at B. Altman next year? Is it true?”

“Yes,” Dana said. “B. Altman is underwriting Lord Snowdon’s photographic retrospective for the benefit of the Association Residence for the Aged.”

Tony was none other than Antony Armstrong-Jones, first earl of Snowdon.

“What a coup!” Vreeland said. “He’s such a fabulous man.”

“We learned of Lord Snowdon’s interest in aging in the TV documentary ’Don’t Count the Candles,’” Dana said.

Diana Vreeland laughed and said, “That, my dear, is the first rule of living happily ever after. Don’t count the candles! And I’d love to have you join me at the Costume Institute.”

Dana smiled and thanked Vreeland. She was beaming, but she also realized that her personal theme of the night had surfaced yet again in the saying “don’t count the candles.” That, too, was an expression of the big picture—not to look at a single year or event, but at the totality of one’s life. As Kim might have said, why count individual stars when there was an entire night sky that comprised the Milky Way? Wanting to advance her career was all well and good, as was becoming a partner in a prestigious law firm. Both pursuits, however, were part of a larger tapestry.

Angel of the Waters

Angel of the Waters is an eight-foot bronze sculpture designed by Emma Stebbins in 1868, the first woman to receive a public commission for a major work of art in New York City.  Unveiled in 1873, it was the only sculpture commissioned during the original design of Central Park.  The statue depicts a female winged angel touching down upon the top of Bethesda Fountain.  Stebbins designed the statue to celebrate the Croton Aqueduct, opened in 1842, that provided fresh water to the city that had been plagued by infectious diseases from polluted waters. Thus, the angel carries a lily in one hand, representing purity, and with the other hand she blesses the water. At the dedication, the brochure quoted a verse from the Gospel of St. John, Chapter 5:2-4: “Now there is at Jerusalem by the sheep market a pool, which is called….Bethesda….whoever then first after the troubling of the waters stepped in was made whole of whatsoever disease he had.”  In Calvert Vaux and Frederick Law Olmsted’s 1858 Greensward Plan, the terrace was called The Water Terrace, but after the unveiling of the angel, the name was changed to Bethesda Terrace. Location: Mid-Central Park at 72nd Street 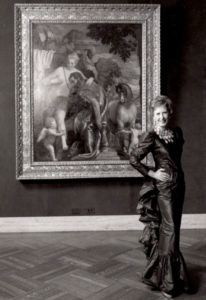